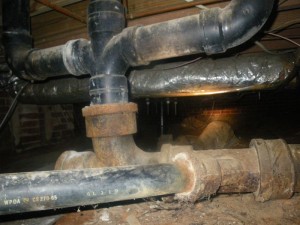 Replacing cast iron drains and pipes can be a tricky business and should definitely not be attempted by homeowners who do not have training and experience, which is why you should call the best cast iron drain replacement and repair company in Normal Heights San Diego if you suspect that there is a problem with your cast iron drains or pipes.

Cast iron drain and pipe replacement is a common problem in this area as cast iron was used for years before more modern drains and pipes began to be installed that were made from materials that were far easier to care for.  Damage can range from simple drain replacement to the need to repair or replace extended segments of cast iron piping.

Not only is it a common problem, it is a difficult job to tackle and can be expensive depending on the accessibility and set up of your home or business’s drain system. Without the right tools, those who attempt to replace cast iron pipes and drains on their own can end up not only with a huge mess, but with cuts and scrapes and blistered hands as well.  Another thing to keep in mind is that cast iron drains and pipes tend to harbor large amounts of bacteria due to their rough texture; bacteria which, if it comes in contact with your skin, can increase your chances of becoming ill.

Given the age of most cast iron pipes and drains, it is a good idea to call a professional plumber in for a general plumbing consultation if you think that you may have a problem, even if you plan on (or even considering) taking care of the problem on your own, as a professional plumber can give you an accurate assessment as to the location and severity of the problem you are facing.

At Plumbing & Drains Solutions we have the professional staff, skills and tools to tackle all of your cast iron replacement needs.  With years of experience in all areas of plumbing, we can not only give you an accurate assessment as to how extensive your cast iron drain or pipe problem is, we can also give you an idea of just how much it is going to cost to have your cast iron pipes and/or drains replaced.